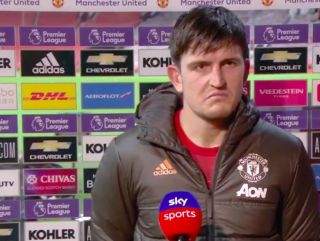 Harry Maguire rued Manchester United’s slow start and lack of creativity as the Reds fell to their third home defeat in the league against Arsenal.

United were devoid of energy and enthusiasm throughout and were second best in all departments against Mikel Arteta’s well organised Arsenal side.

Pierre-Emerick Aubameyang’s 69th minute penalty was the difference, and United could have no complaints about the awarding of the spot-kick with Paul Pogba foolishly tripping up Hector Bellerin when the Spanish full-back was in an innocuous position.

Maguire was arguably one of United’s better performers on a day where none of Ole Gunnar Solskjaer’s players really stood out.

The United captain discussed his frustrations at the slow start and the amount of times the Reds relinquished possession, particularly in the first-half.

He admitted that United weren’t good enough throughout and refused to make any excuses, instead suggesting there was a lack of concentration in the opening exchanges.