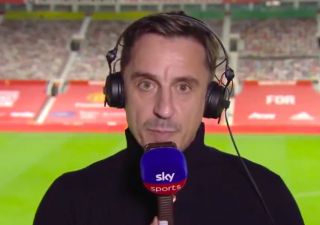 Gary Neville believes Ole Gunnar Solskjaer’s biggest problem at Manchester United is finding a system that can accommodate his most important players.

United were second best and deservedly defeated by Arsenal at Old Trafford, as Pierre-Emerick Aubameyang’s penalty condemned the Reds to their third straight home league defeat of the season.

Solskjaer opted for the midfield diamond that was so effective in midweek against RB Leipzig, but were completely dominated by an intense Arsenal engine room of Thomas Partey and Mohamed Elneny.

United had no answer for Arsenal’s high press, and the Gunners performed in a way that proved they are improving under Arteta’s methods.

Meanwhile, the Reds were devoid of any enthusiasm and creativity, failing to seriously threaten Bernd Leno’s goal.

Plenty of supporters had felt Solskjaer’s team had turned a corner after superb Champions League performances against Paris Saint-Germain and Leipzig.

But familiar problems reared their head against Arsenal and Neville is concerned about the lack of balance in Solskjaer’s side.

Neville insists Solskjaer has a squad of talented players, but believes the widely accepted ‘best players’ aren’t effective all playing together.

Listen to Neville’s post-match reaction below, via Sky Sports:

🗣"He is going to have to be cruel to be kind to some of those players"@GNev2 gives his thoughts after Manchester United's 1-0 defeat to Arsenal and what Ole Gunnar Solskjaer must do going forward pic.twitter.com/Z5A6xQJIsm