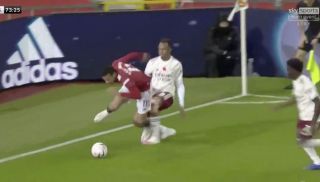 Arsenal centre-back Gabriel Magalhaes was a very lucky boy not to have seen red late-on in the second-half after a poorly timed challenge on Mason Greenwood whilst already being on a booking.

Gabriel, 23, was booked in the 27th-minute and was forced to spend the remainder of the match stepping on egg shells.

However, the Brazilian defender was lucky not to have been sent for an early bath after a poor recovering tackle on United’s Greenwood saw referee Mike Dean blow for a foul but fail to reach for his back pocket.

Should Gabriel have seen red for this tackle? – Let us know in the comments.