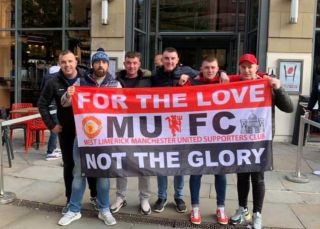 It’s just after midnight and I’m wide awake lying in bed, usual banter going on in the group chat ahead of a game.

I’m not long after getting home from another 12 hour shift, I’ve checked to make sure my passport is where I left it (it isn’t), the usual panic until the wife locates it (it was where I left it, just not the same place I remembered).

A light bag packed with the usual few bits, the 100ml or less, travel sized toothpaste, mini can of deodorant, toothbrush, spare pair of socks as likely it’ll be pissing in Manchester and two pairs of jocks, you never know what could happen…

One of the lads is collecting me at 2am, I really should be sleeping, but as always, we’re too busy talking nonsense, making a case for who should start, where we’ll go for the first pint, you know yourself.

1.45am: My eyes are trying their best to slam shut, into the shower and wake the entire house trying to wake myself up a bit… wife’s well impressed.

“I’m outside” – the dreaded text that it’s time to go again for another trip. Sweating under my breath that this is the last time I’m doing these flight times, just like the last 7/8 games this season, the same empty threat to myself.

We cruise on to Dublin airport, a nice 2.5 hour spin in the red eye hours of the night, because Ryanair decided to pull their flights from our nearest airport, Shannon, and this flight was probably €7 cheaper than the Cork flight, so it made sense at the time. Nobody ever considers the effort involved in getting to Dublin and the loss of sleep.

Airport is the same as always, a few familiar reds scattered about having the obligatory pint or coffee, a few nods of the head or a quick chat and the “yeah, sound, we’ll split a taxi to the city, meet you after the flight.”

Get to Manchester at around 7.30am.

Manchester at that hour is quite a unique experience at times, between the spice heads of Piccadilly floating around like zombies to the all night sesh heads and the walk of shamers making their way to safety of their bed, but there isn’t a whole pile to do.

We kill an hour or two strolling around, grabbing a red bull or a coffee to stop us from giving in to sleep.

“What time does Paramount start serving again? Is it 9 yeah? No 10? Ah look we’ll just stroll down and see!”

Slowly but surely, the travelling posse from Ireland start to enter in their dribs and drabs, we settle in, the usual catch up chats begin and before long you’re trying to force what slightly resembles a breakfast into yourself, while smashing back those beautiful morning pints.

The local Reds finally get out of bed and one-by-one the texts start to come in, the familiar faces start to appear and before long, the gang is all together.

Someone mentions Nags, we resist for one more pint and finally we vacate and head down.

Another belly full of beer.

About time to meet up with the TRA lads and it’s a trudge down to Barca Bar.

It’s still a little early, the full contingent hasn’t yet arrived but it’s staring to get noisy, flags are up, people starting to get a bit of energy into them and it’s starting to get to that same old time when you start to feel that real matchday buzz, the pre-game nerves, the smile on your face that being here was worth the zero sleep.

One of the boys is absolutely twisted, as per.

Time to head to OT, try make it in for a quick beer and a sing in the concourse.

Place is bouncing, this is what it’s about boys.

Out into SERS we go, as we look across at East Stand Tier 2, where our season ticket seats are, with a wry smile…

90 minutes of non-stop singing and chanting, the ending up 7 rows away when we score, the hugs and embraces with lads you’ve been to every game with this season, to lads you’ve never met before.

This is football. This is our religion.

“What times your flight?”

“You flying to Dublin? You flying outta Manchester or Leeds or where?”

The sinking feeling hits home, off to Manchester Airport Terminal 3. Anyone familiar with this place will know what I mean when I say it’s the worst place on earth.

Every time we’re there, we’re dead on our feet with tiredness, hangover either on the verge of kicking in already or still smashed.

A horrible flight back to Dublin.

Spend the whole drive swearing we’ll fly over the day before next time, this is horrible and I’m wrecked.

But we know we won’t…

We can’t, if you want to get to as many games as we do, you have to keep the costs down, you have to try minimise hotel stays, overnighters where you end up at 5am begging to be allowed in for another pint, another £200 down the swanny.

Off to sleep, but just before we close our eyes, a sly check of our flight times for the game in 2 weeks time…

One of the boys is collecting me at 1.30am…flying out of Dublin…