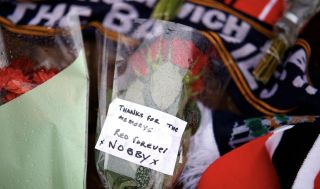 Heartfelt tributes paid to the late Nobby Stiles who passed away yesterday aged 78 have been placed outside of Old Trafford ahead of today’s Premier League match against Arsenal.

The former United and England international sadly passed away yesterday after he lost his battle to advanced prostate cancer, as per BBC Sport.

Ahead of Stiles’ former club’s Premier League match against Arsenal later this afternoon, tributes have poured in for the much loved and desperately missed Busby Babe.

Tributes are paid to the late great Nobby Stiles MBE outside Old Trafford ahead of this afternoon’s game ❤️#MUFC #MUNARS pic.twitter.com/OMOYHMe05Z