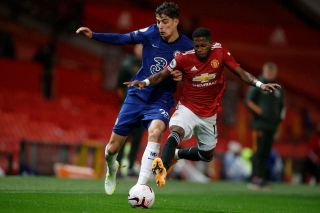 Fred has become one of Ole Gunnar Solskjaer’s most trusted players.

The Brazilian starts alongside Scott McTominay against Arsenal and we’ve spotted some statistics on Twitter that are revealing to say the least.

As one of the better performers during United’s 5-0 win over RB Leipzig on Wednesday night, Fred was let down in stages of the match by his passing but defensively he was second to none. We need his presence in the middle because he is often our engine and helps speed up transitions from defensive to attack.

We really don’t have another player like Fred. He gives Solskjaer something different and we’ll need him at his best against the Gunners who have attacking players that can hurt teams.

According to Football Index (H/t Squawka Football), Fred has made more ball recoveries per 90 minutes in the Premier League than any other outfield player with 900+ minutes.

Since joining Man Utd, Fred has made more ball recoveries per 90 in the Premier League than any other outfield player with 900+ minutes.

You’ll get tired just looking at his defensive coverage. 😰 pic.twitter.com/ydzG48luOB

With 9.6 ball recoveries per 90 minutes, Fred is a complete nuisance because he’s everywhere on the pitch. Look at the amount of small green dots around the pitch in the graphic above.

It suggests that this is the reason Solskjaer has a lot of trust in Fred.

Hopefully another commanding performance this evening! Follow @StrettyNews for updates.