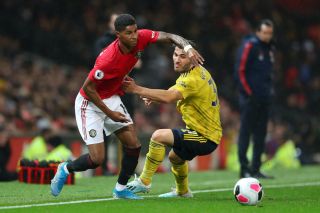 United come into today’s game in decent form having taken maximum points in their first two fixtures in their tough Champions League Group including a 2-1 win over PSG and 5-0 dismantling of RB Leipzig.

Domestically, Ole Gunnar Solskjaer is hoping to continue his rebuild after the Reds’ 6-1 defeat against Tottenham Hotspur earlier this month.

United have bounced back well since Jose Mourinho’s side equalled the Red Devil’s worst-ever home defeat (6-1 vs Man City, 2011) having beaten Newcastle United (4-1) and taken a hard-fought point (0-0) off Chelsea last time out.

Ahead of this afternoon’s game, we have taken a look at three areas the game could be won and lost.

It is worth noting, at the time of publish, both side’s had not announced their starting eleven.

Axel Tuanzebe featured for the first time in a long time when the young Englishman was recalled to the Reds’ starting line-up against PSG two weeks ago and put in a superb performance.

The defender was tasked with keeping world-class attacking duo Neymar Jnr and Kylian Mbappe quiet which he did expertly.

Should the youngster featured again today, he’s main responsibility will be to nullify the pacey threat Arsenal’s Pierre-Emerick Aubameyang and Alexandre Lacazette pose from the left-hand side.

United are unlikely to face a long-ball threat from Arsenal given the way Mikel Arteta instructs his players to play, therefore, Fred’s inclusion could prove decisive for United.

The Brazilian is in arguably the best form of his United career after a series of recent performances have gone someway to repaying his hefty £53.1m price-tag.

If the South American box-to-box midfielder can get among Arsenal’s hard-working and physical midfield and not only break the Gunner’s creative play up but also drive the Reds forward, Solskjaer will be well on his way to claiming the battle of the middle of the park.

Which attackers get in behind best

United and Arsenal, on paper, play a very similar style of counter-attacking play and the game could very well be decided by how clinical each side’s wide attackers are on the day.

If the likes of Mason Greenwood and Marcus Rashford can successfully get in behind Arsenal’s back-line and work the space left behind the Gunners’ flying wing-backs, don’t be surprised to see at least one long-range stunning effort after either attacker cuts inside.

This afternoon’s match is scheduled to kick-off at Old Trafford at 4.30pm UK time.

One response to “Opinion: Three areas this afternoon’s game against Arsenal can be won and lost”