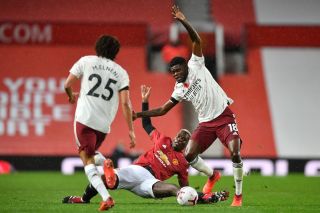 United were undone by an Arsenal penalty which midfielder Paul Pogba conceded mid-way through the second-half.

Try as they might, United could not pull the game back level and eventually conceded all three-points to Mikel Arteta’s Gunners.

In light of the Reds’ poor performance, we have rated every player who featured for Solskjaer today.

Despite Arsenal’s dominance in the first-half, the Spaniard was rarely called into action. However, United’s number-one was thankful to see the crossbar come to his rescue after a great shot from Willian clipped the woodwork.

Faced a Pierre-Emerick Aubameyang penalty mid-way through the second-half but the Arsenal forward smashed it home, not much United’s number-one could have done to prevent it.

Caught out of position several times during the first-half, looked to be struggling to recapture his best form for large parts of the opening 45-minutes.

Carried on the second-half much the same way his first-half went, offered nothing going forward and wasn’t up to his defensive best.

Arguably the pick of United’s bunch. Had another decent game as the Swede’s impressive form continues.

Had an okay game but failed to command the United back-line as well as Solskjaer would have hoped.

Definitely not the worst player on the pitch.

Had a decent first-half but was called into action far more frequently than Solskjaer would have hoped for.

The United left-back made a brilliant recovery run after team-mate Mason Greenwood played a wayward pass which promoted Shaw to make a vital recovery run, which he executed perfectly.

Again though, offered nothing in the final third.

United’s industrious midfielder who was tasked with holding the midfield’s defensive shape had a decent 45-minutes.

The Brazilian made a handful of important interceptions early on. The Reds could have easily gone into the break 1-0 down if it wasn’t for the South American’s reading of the game.

Subbed off after 62-minutes and replaced by fellow holding midfielder, Nemanja Matic.

Not the Scotsman’s finest game, can probably consider himself him lucky to have stayed on the pitch beyond the first-half.

United’s midfield offered very little in either ends of the pitch, McTominay was no exception.

Gave away an Arsenal pen mid-way through the second-half, the Frenchman had a poor game all round.

Looked leggy, off the pace and eventually ended up frustrated.

United’s outlet for the first 45-minutes, continuously tried to make things happen as well as going about his defensive duties well.

Fernandes endured a dreadful tackle from counter-part Pierre-Emerick Aubameyang who was lucky to escape without even so much as a booking.

Fernandes’ second-half went much the same way as his first, similarly to most of the team, he will definitely have better games in a United shirt.

Subbed off in the 75th-minute for Donny van de Beek.

United’s usually reliable teenage sensation had a disastrous opening 45-minutes. Try as the youngster might, nothing went his way this afternoon.

Subbed off in the 75th-minute for Edinson Cavani.

Looked to be United’s sharpest player on the pitch during the first-half, busy and energetic.

Played a delicious nutmeg on Arsenal defender Rob Holding before eventually being bundled over.

Wasn’t the Englishman’s day though, couldn’t make the break through in the second-half.

Had just over 15-minutes on the pitch, looked busy and worked the Arsenal channels well.

Ultimatley though, the South American could not be the difference. Fans will undoubtedly be hoping he gets a start sooner rather than later.

Same as Cavani, got 15-minutes and was so unlucky not to get the equaliser after a deflected shot clattered against the Arsenal post.

Again, like Cavani, fans will be wanting to see more and more off the Dutch midfielder in the coming games.

Looked to go about his defensive duties well and United arguably improved with the Serbian at the heart of their attack.

Unlucky not to score in the 93rd-minute from the edge of the ball, scuffed it though.