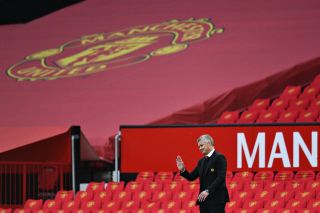 Manchester United are looking for their first home win of the season in the Premier League and it’s Arsenal who stand in their way this weekend.

An old rivalry, one Bruno Fernandes spoke to Sky Sports about this weekend and promised that Manchester United would bring fight to table once the game kicks off.

I’m excited not only because of that, but Solskjaer has named a pretty attacking line-up in a diamond formation.

Paul Pogba is back in the starting line-up but Donny van de Beek has been benched again.

Mason Greenwood and Marcus Rashford will lead the line, but Solskjaer has Edinson Cavani on the bench if needed.

Anthony Martial is still suspended after his red card against Tottenham.

United’s starting line-up usually leads to uproar on social media because there are many out there who think they know better than Solskjaer.

Instead of moaning about selections, I hope to be proven wrong whenever I disagree but most fans are delighted with the line-up today.

This is the first time there hasn’t been a meltdown over a United line up in about 6 years.

Diamond formation for Manchester United. The one Louis van Gaal suggested got the best results for his United side, but it often left him ‘twitching his ass’ on the bench.

Don’t get overconfident with how Arsenal are setting up for this game. They can be in relegation form for the entire season and play us off the park as if they were prime Barcelona against us.

So happy we’re playing a diamond formation. Hopefully it works, I think it will… Come on United ❤️

Logical line-up from Solskjaer, given he has stuck with the diamond and its impact in midweek. Fred and Fernandes are undroppable, McTominay the more mobile defensive midfielder and Pogba was superb further forward against Leipzig. It's a formidable front six. #mufc

Happy with our lineup though. No excuses not to win today

Good to see Solskjaer play the diamond again. Suits many of United's players, with the onus on Rashford and Greenwood to drift into wide areas when needed. Fred and McTominay had to start, Pogba over VDB an understandable call. #mufc #MUNARS

Hopefully it’s enough to give us the important three points!