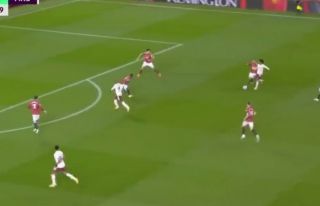 Luke Shaw knows Alex Telles will be on his heels to get into the Manchester United line-up but the left-back appears to be hitting good form at the right time.

A mistake by Mason Greenwood saw United lose possession in the early stages of their Premier League clash against Arsenal.

Arsenal moved forward with their eyes on goal but Shaw had other ideas.

The England international gets back quickly to make a blistering recovery tackle on Willian.

Willian joined Arsenal in the summer after spending seven years at Chelsea. His pace has always been a threat when we’ve played against him, so Shaw deserves credit for going that extra mile to win back the ball.

Check out Shaw’s tackle below, footage courtesy of Astro Supersport 3:

It’s a great complaint for a manager to have when he has a number of players fighting for starting roles.

Telles looks a brilliant crosser of the ball and that is an area Shaw must improve going forward.