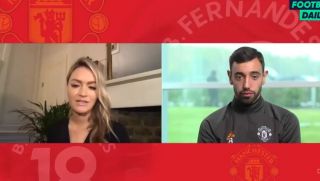 Bruno Fernandes promises “the fight will be there” when Manchester United take on Arsenal later today.

Everyone has noticed how this rivalry is not as fierce as it once was, and personally I’d love to see a bit more bite whenever the Reds take on Arsenal.

The Portuguese playmaker says he watched the infamous Roy Keane and Patrick Vieira tunnel spat in 2005, ahead of today’s game.

He notes that there were different players and different situations. Back in those times United and Arsenal competed at the neck for league titles, but now they’re both stuck in a swamp of mediocrity.

Keane is in the Sky Sports studio this evening for the big game this Sunday between two historic rivals.

Watch part of Bruno Fernandes’ interview with Sky Sports below: