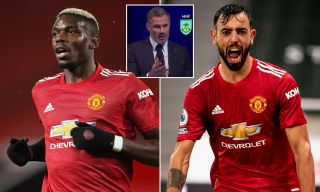 Bruno Fernandes is confident he and Paul Pogba can play together at Manchester United.

It’s been an inconsistent start to the season for United with plenty of questions remaining over the suitability over our two marquee midfielders, and whether they can form a formidable partnership alongside each other.

This comes after former Liverpool defender Jamie Carragher stated that United can’t play Pogba and Fernandes together in the same team.

“I actually admire (Ole Gunnar) Solskjaer for putting Pogba on the bench,” Carragher said on Monday Night Football, as quoted by the Daily Mail.

“I said a few weeks ago after the Crystal Palace game, Fernandes and Pogba is not a midfield that can play together and never will be.”

The Frenchman has watched a few games from the bench this season, but this is because manager Ole Gunnar Solskjaer has more options in midfield than ever before and he’s trying to stretch his squad throughout the season.

But, speaking ahead of United’s clash with Arsenal on Sunday, Fernandes insists his relationship with Pogba is as good on the pitch as it is off it.

“He’s a funny guy, he always wants to joke. I know him from Italy already but now I have the chance to be in a team with a World Cup winner.

The spotlight is always on Pogba with sections of the British media referring to him whenever things go wrong. I don’t agree with Carragher’s comments and reckon they will eventually come back to bite him in the arse.

Imagine if Solskjaer had that attitude — willing to give up on two world-class players, who could possibly unite and destroy teams up and down the Premier League.

Fernandes also defended Pogba insisting he is as motivated as anyone when his name isn’t on the teamsheet.

“Of course Paul is an amazing player who has done a lot of great things in the past few years. The way he came in against Paris Saint-Germain, against Newcastle, was perfect for the team.

“A lot of people may think Paul is angry on the bench and that he will do nothing when he comes on because he is angry, but he comes in with the right motivation, as we saw with his assist in Paris.

“He was there, he was fighting, holding the ball in the corner for us, he did a really good job. Maybe some people think he was angry because he wanted to play and that he wants to leave the club. Everyone knows the qualities Paul has, he is doing very well.

“Being on the bench is a problem for everyone, but this problem is motivation for Paul. He uses this as motivation and he is helping the team a lot when he comes in and players, like he did in the last game in the Champions League.”

United take on Arsenal later today and there are questions over how Solskjaer will line up. Will it be a diamond, a five-man midfield, a three-man attack? Time will tell but Fernandes makes it clear he’s happy playing anywhere so long as United get the result they need.

“As a player you want to play, for me it doesn’t matter about the formation. The most important thing is helping the team, and if the coach thinks I need to play on the left, right, centre, no 8 or no 10, I have no problem playing everywhere. I can adapt to everything.

“Most of the time you don’t need to play your best in that position, you have to do what you can that is best for the team. Sometimes it’s not about you, it’s about the team and we need to be like that to win trophies.

“Of course we have a lot of formations, we played with three at the back against PSG, then we played with a diamond and a front three. This is modern football.

“Maybe some years ago a team would have a formation and they would play with it all season. Now it’s time to understand what is better for the game and what you can change for the game.

“Against Arsenal, the coach may think it’s better to play the same system or maybe we go back to three or play with a back four.

“We have a lot of people watching Arsenal and seeing what can be better for us as a team, how we can play better and how we can cause more problems to their team.”