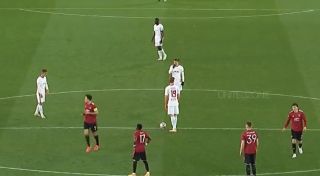 A clip has surfaced which perfectly incapsulates Manchester United midfielder Scott McTominay’s leadership qualities after he was spotted demanding his team-mates remain ‘aggressive’ in the 76th-minute against RB Leipzig earlier this week.

McTominay, 23, has spent his entire professional career with United after joining their illustrious youth academy back in 2002.

After climbing United’s ranks and making 30 appearances for the Reds’ youth sides, McTominay forced his way into the club’s senior first-team and has since gone on to make 91 appearances in all competitions.

McTominay’s last run out was during United’s 5-0 demolishing of Bundesliga leaders RB Leipzig during the Champions League group stages earlier this week.

The Scotsman was introduced after 63 minutes and a clip has emerged showcasing the midfielder displaying a winner’s mentality during the 78th-minute after he demanded his side remained aggressive despite being 3-0 up.

Scott Mctominay after Marcus Rashford’s goal in the 78’. 🗣

Making sure the standards don’t drop in the final 12 minutes while we were 3-0 up and maintaining the aggressiveness against RB Leipzig 💯 pic.twitter.com/8lFX5Ymxwq

Read more: Jan Vertonghen hints at what clubs Mauricio Pochettino is holding out for