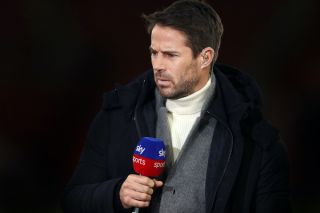 Jamie Redknapp believes Manchester United are miles away from where they should be under Ole Gunnar Solskjaer.

The Red Devils host Arsenal in the Premier League on Sunday. This has always been a big fixture, even if it lacks the bite we witnessed when Roy Keane and Patrick Vieira battled on the pitch.

On a personal note for Ole Gunnar Solskjaer it will be his 100th game in charge of United. He took over as manager at Old Trafford in December 2019. Since succeeding Jose Mourinho he has won 55 times as United manager so far, but hopefully this season we end up with a trophy as well as a strong Premier League position.

However, it’s been an unsteady start to the new Premier League season for both sides. United have suffered shocking defeats to Crystal Palace and Tottenham Hotspur, leaving them in 15th place after five games.

The 6-1 loss against Tottenham was embarrassing and we can’t afford to have more games like that this season. And if anything, I think we could give Arsenal a real hammering if our players are at the race. It may even be worth the punt and Ghana betting apps is one way to do that.

There’s been some contrast in the UEFA Champions League with United getting off to a 100% record after beating PSG 2-1 and RB Leipzig 5-0.

Despite their recent form, which has significantly improved, Redknapp told Sky Sports that Solskjaer still has a lot to prove which no United fan will deny.

“It was obviously an incredible start. When he first arrived we felt it was almost the second coming, a new Alex Ferguson!

“Everyone was so excited by the regime, we all thought that he’d got this group of players together and made everything better after what Jose [Mourinho] had done. But that was pretty short-lived.

“The position United are in is nowhere near where they should be. They’ve thrown a lot of money at the problem but haven’t always bought the right players… so I think if you’re analyse where Ole Gunnar Solskjaer and Utd are right now, they should never be in the bottom half of the table.”

Earlier this week Arsenal beat Dundalk 3-0 in the Europa League. They had 24 hours less to prepare for their match against United as a result, but it’s not as if they were playing RB Leipzig or another side who reached last season’s Champions League semi-finals.

It’s a must win after our draw last weekend with Chelsea.

One response to “Redknapp: Manchester United ‘nowhere near where they should be’”