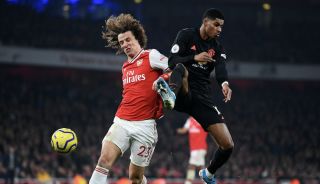 Manchester United are set to face-off against Arsenal in a hotly anticipated Premier League tie on Sunday with both sides looking to claim a valuable three points.

Ole Gunnar Solskjaer’s Reds come into tomorrow’s game off the back of a superb 5-0 thumping over RB Leipzig in the Champions League Group stages earlier this week.

Domestically, United have bounced back well after their abysmal performance against Tottenham Hotspur earlier this month which saw them fall to a devastating 6-1 defeat.

Since Jose Mourinho’s demolishing of his former side, Solskjaer has claimed four points from a possible six after beating Newcastle United 4-1 which they later followed up with a 0-0 draw against Chelsea.

The Gunners currently sit 12th in the Premier League table on nine points from their first six games as United remain in 15th on seven points, however, the Red Devils have only played five games.

Ahead of Sunday’s important clash of two of England’s heavyweights, United fans have taken to their social media to give their predictions on how the game could play out.

we need to win tomorrow😩