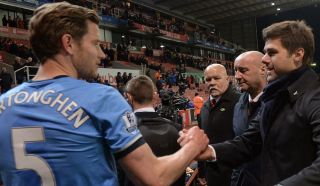 Former Tottenham Hotspur and current Benfica defender Jan Vertoghen has hinted that his old manager Mauricio Pochettino is waiting to become the new manager of one of the Premier League’s ‘two or three’ biggest clubs.

Vertonghen, 33, joined Spurs from Dutch side Ajax eight years ago before the Belgian left to join Benfica earlier this summer.

During the commanding centre-back’s time in England’s top-flight, he became known as arguably one of the best defenders of the decade after a seven year spell under world-class gaffer Pochettino helped guide Spurs to their first ever Champions League final (2018-19).

However, both Pochettino and Vertonghen have now departed Spurs after the Argentinian manager was giving his marching orders in November 2019 and was subsequently replaced by Jose Mourinho.

Pochettino’s next managerial destination has been speculated for the last 12-months with United seemingly leading the race to award the South American with the Old Trafford hot-seat.

According to a recent report from The Mirror, current United manager Ole Gunnar Solskjaer is facing the boot by executive vice-chairman Ed Woodward should he fail to turn the Reds’ on-field fortunes around.

However, recent Champions League wins against Paris-Saint Germain (2-1) and RB Leipzig (5-0) have gone a long way to easing some of the pressures endured by Solskjaer.

Weighing in on the conversation as to where Pochettino’s next job could be, speaking exclusively to CBS Soccer (as quoted by Goal), Vertonghen said: “I can imagine he’s impatient.

“I think the English league suits him very well as he’s a manager that prioritises fitness levels and the physicality of the game.

“I think managing in the Premier League is probably the best thing he can do.

“He will always want to coach a big team I guess, so you have to look at the biggest teams in the league and there are only two or three you can really look at I think at this point.

“I won’t name them out of respect for the other managers, but I think that’s what he’s looking at. He wants that big team to confirm him what he’s been doing with Tottenham and what he did very well.

“If I was him I would be impatient because he really loved his job and you want to continue that.”

Which side do you see Pochettino managing next and should he replace Solskjaer at United? – Let us know in the comments?