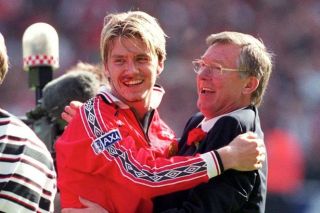 Sir Alex Ferguson had many obstacles to overcome during his time at Old Trafford, not least the influx of foreign managers. But it was the bespectacled Frenchman who gave him most trouble. This is part 2 of an extract from Even the Defeats – How Sir Alex Ferguson Used Setbacks to Inspire Manchester United’s Greatest Triumphs. Read part one.

The 2002/03 season began with more of the same and United looked like they were going to see an opposition team win the title for two consecutive years for the first time in the Ferguson era, which would have signalled a real shift in the balance of power. The turning point, however, was brought about by another crushing defeat – this time at the hands of rivals Manchester City, United’s first in the derby since the 5-1 thrashing of 1989. The 3-1 margin of defeat wasn’t so great but a strong reaction was required all the same. United were well off the pace, both in that game and in terms of the title race, as they witnessed Arsenal galloping ahead, and even Liverpool eight points in front. Ferguson had to act.

Daniel Taylor wrote in The Guardian after the bitterly disappointing defeat, ‘Ferguson’s players had their noses bloodied in the 127th Manchester derby because City passed the ball better when it mattered, played with greater cohesion and showed the sleeves-up mentality that was so lacking from those in red. Every United defeat is enough these days to prompt talk of a crisis but in this case the most galling aspect for Ferguson was that it was not totally unexpected.’ Taylor continued in his assessment, ‘The reaction it provoked from Ferguson, usually such a fierce protector of his own, epitomised his sense of helplessness. I’ve given them a bollocking, and quite rightly. You can’t accept that. I just feel sorry for the fans. I wish I could let them into the dressing room so the players would know what they are thinking.” The inquest will be tortuous and torturous.’ ITV’s Clive Tyldesley spoke to Ferguson after that game and recalled his mindset, particularly in the wake of such a significant defeat. ‘He made that comment about letting the fans in to remind them of how they should be feeling after a derby defeat, and I often felt with Ferguson, he knew exactly what he was going to say, no matter what I asked him. I could have asked him what the capital of Ecuador was and he still would have ranted about letting the fans remind the players of what it’s like to lose a derby.’

Ferguson’s biographer, Paul Hayward, backed this up. He said, ‘His idea was always that this is my press conference, not your press conference. He always wanted to be in control of the discussion. Often he would turn up with an idea he wanted to get across.’ Gary Neville reflected on Ferguson’s reaction to his first derby defeat in 13 years, ‘The boss was steaming. You could see him looking around, ready to explode. Then Ruud walked in with a City shirt slung over his shoulder. He’d been asked to swap on the way off and hadn’t thought anything of it. But the manager did. “You don’t give those shirts away. Ever. If I see anyone giving a shirt away they won’t be playing for me again.”’

It was to be the season’s nadir for Ferguson and his team. He got the reaction he wanted, with his team coming from behind in the title race to eventually win the league with a week to spare.

A 2-2 draw at Highbury as the season entered the final stretch was particularly significant and felt even more so when Ferguson took to the pitch at the end of the match, repeatedly punching the air, as if his team had won, rather than drawn. Wenger, though, was not done yet, and this title win for United was to be their last for four years, an age by Ferguson’s standards.

The summer of 2003 was dominated by one story – David Beckham’s future at Manchester United. Having sealed the title, and with Beckham scoring in the final two games of the season, the speculation of an impending departure was frequently dismissed by those in the know. But the relationship between the midfielder and Ferguson had been deteriorating throughout the season, despite Beckham having only signed a new contract a year before.

‘In his final season with us,’ Ferguson wrote in his autobiography, ‘we were aware that David’s work-rate was dropping and we had heard rumours of a flirtation with Real Madrid.’

The frayed relationship was summed up by one infamous incident, also following a defeat. To make matters worse, that loss came against Arsène Wenger’s Arsenal in the FA Cup. Ferguson was livid with his team, and none more so than Beckham, who he thought was careless in his inability to track back, failing to stem the twin threats of Arsenal left-back Ashley Cole and winger Sylvain Wiltord. Beckham took umbrage in the dressing room to the criticism, an attitude that was becoming all too familiar according to Ferguson. Beckham swore in the manager’s direction and Ferguson’s reaction was to kick a football boot that caught the midfielder just above the eye, leaving a gaping wound. It was a ‘freakish incident’, according to Ferguson. ‘If I’d tried it a million times, it wouldn’t happen again. If it did, I would carry on playing.’

David Beckham lines up for United with a plaster above his eye following reports that Ferguson had kicked a boot at him during a dressing room argument following defeat against Arsenal at Old Trafford, February 2003. pic.twitter.com/NBorfA4YIu

Nevertheless, it was the beginning of the end for Beckham and United. Ferguson tried to explain to the midfielder why he had been so frustrated with his display, but his complaints fell on deaf ears. Ferguson felt as though his authority had been challenged sufficiently, and sold Beckham to Real Madrid for £24.5m.

Dismissing the challenge posed by Wenger would not be so easy and in many ways the boot incident summed up where the two managers were at the time. Wenger was playing his reserves against most of United’s first team in that cup match, yet still the French manager’s side came out on top. While Ferguson reacted angrily, Wenger seemed cool. At that stage, it looked like there would only be one winner in their duel.

Part three of this extract will be published later today. We would like to thank author John Silk (@JSilk) for sending this our way, and he will be appearing on the Strettycast to talk about the book next week!

Even the Defeats – How Sir Alex Ferguson Used Setbacks to Inspire Manchester United’s Greatest Triumphs. is published by Pitch Publishing, £20. It is available from Amazon.

Read more: Redknapp: Manchester United ‘nowhere near where they should be’