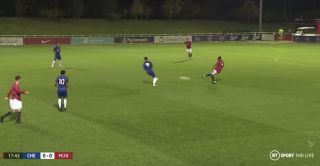 Manchester United defender Teden Mengi is doing all he can to split Chelsea’s defence in the FA Youth Cup after the youngster tried to force proceedings with a pin-point through-ball which carved the Blues’ back-line wide open.

Mengi, 18, is in action tonight for United’s under-18s who are currently drawing 0-0 with domestic rivals Chelsea in the FA Youth Cup.

United’s youngsters have found themselves on the back foot during the opening 20-minutes but the deadlock was almost broken from the most unlikeliest of sources after the Reds’ centre-back played a delicious through-ball.

The winner of this match will play Manchester City’s under-18s in the final on November 2.