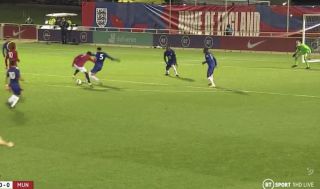 Manchester United’s under-18s are currently trailing 1-0 against Chelsea in the second FA Youth Cup semi-final of the night with rivals Manchester City awaiting the winner.

Chelsea enjoyed a dominate opening 20-minutes but some superb last ditch defending ensured the Reds went into the break all square at 0-0.

United came closest to opening the scoring just before half-time after Swedish attacker Anthony Elanga nearly scored a wonder overhead kick before the bar denied him.

However, just before Chelsea went 1-0 up, United’s highly-rated youngster Shoretire, did all he could to break the deadlock after showcasing some superb technical ability.

The winner of tonight’s game is set to play Manchester City in the final on November 2.