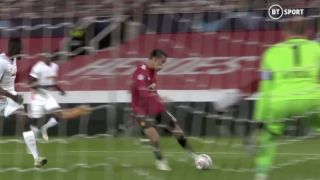 Mason Greenwood is a true star in the making. While the media attempts to bring him down at every opportunity, jealous of the ability he possess, the young Manchester United striker has continued to what he does best — scoring goals.

When Manchester United took on RB Leipzig during the week Greenwood was named in the starting line-up. After an array of headlines suggested he had to be warned about his behaviour at Carrington training complex, however, these claims were dismissed by manager Ole Gunnar Solskjaer (via Guardian).

Greenwood scored 21-minutes into the match and didn’t look like a player bogged down by negativity in the press. It’s important that Solskjaer backs him now but he must also continue to prove himself to the manager. If he’s showing up late for training he needs to fix.

It’s all about developing him into the best player he can be. And right now he is looking like a world beater!

Pogba played in a superb through ball before Greenwood steered the ball past RB Leipzig goalkeeper Peter Gulacsi.

Check out a slow-motion clip of the goal below which shows Greenwood’s movement and finish.

Read more: Preview: Manchester United should have too much for Arsenal