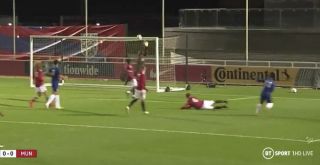 United and Chelsea cannot be separated after 39-minutes on the clock but it’s fair to say the Blues have had the better chances.

The score should probably be in Chelsea’s favour had it not have been for some fine last-ditch defending from both midfielder Charlie McCann and goalkeeper Ondrej Mastny.

Both youngsters are in fine form after showcasing some superb resilience to keep Chelsea’s young attackers out.

The winners of tonight’s semi-final will meet Man City’s under-18s on November 2.