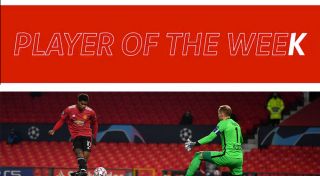 Manchester United forward Marcus Rashford has been named as the UEFA Champions League player of the week after his scintillating performance against RB Leipzig on Wednesday.

Rashford, 22, was named on the bench against RB Leipzig but was introduced onto the field of play with half an hour to go.

The English forward smashed home three stunning goals to put United’s mid-week European tie out of their German counter-part’s reach and in-turn shoot the Reds to the top of Group H’s table.

Rashford, who is having a year to remember became only the second United player in history to bag a hat-trick after being a substitute.

United’s 22-year-old has officially be crowned UEFA’s Champions League player of the week – Thoroughly deserved, too.

The MD2 Player of the Week? It just had to be Marcus Rashford! 🌟#UCLPOTW | @FTBSantander pic.twitter.com/nmCWTuPdB1

Read more: Extract: Even the Defeats – How Ferguson saw off Wenger