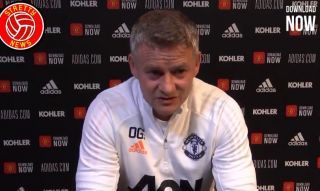 Ole Gunnar Solskjaer will want his Manchester United players to build on their impressive win over RB Leipzig in the UEFA Champions League.

The manager spoke to the press this morning, while Mikel Arteta got his pre-match questions out of the way last night after Arsenal’s 3-0 win over Dundalk in the Europa League.

You don’t need telling that United had a tougher week than the Gunners after a scoreless draw with Chelsea last Saturday — even if Arteta’s side have 24 hours less to prepare for the match.

“[It’s] not up to me to say how far we’ve come,” Solskjaer said. “ I’ve been very pleased with the response from earlier in the season.”

“Now we feel fit, strong and competitive in every game.”

On the role of #MUFC full-backs 🗣 “Don’t have wide wingers like we used to with Giggsy and David Beckham. So we are more dependant on full-backs giving us width.” pic.twitter.com/piseNcJHna

Solskjaer was also asked about playing a diamond formation and the roles of full-backs at United.

It’s clear that the manager wants more goals and assist from these players, but once Alex Telles is back I think we can expect better contributions from left-back at least.

“[We] don’t have wide wingers like we used to with Giggsy and David Beckham,” Solskjaer added.

“So we are more dependant on full-backs giving us width.”