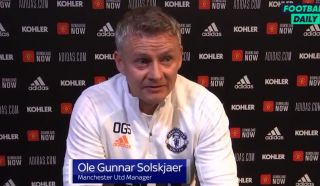 Premier League clubs have voted against continuing to allow five substitutions in a match for the 2020-21 season.

The rule was brought in when the 2019-20 top-flight season restarted in June, having been halted for three months because of the coronavirus pandemic.

But for this season, the league reverted to three permitted substitutions.

Ole Gunnar Solskjaer doesn’t feel as though the player’s well being was considered when the vote was carried out. This is set up to be the most demanding campaign in English football history and we’ve seen other teams in the league suffer a number of injuries yet the season has only kicked off.

“I can’t believe we voted against, we’ve already seen loads of injuries,” the United manager said.

Check out the video from Ole’s press conference below (via Football Daily):

🗣 "I can't believe we voted against, we've already seen loads of injuries"

Ole believes not having 5 substitutions this season was a mistake pic.twitter.com/rq305SBq7U

While he raises good points, the opposite argument likely to come from the lesser teams will point how how they haven’t got big enough squads of quality like United.

The well-being of our players should take priority.

United made great use of their substitutions against RB Leipzig, with Marcus Rashford coming on from the bench to score a hat-trick.

Teams are allowed to make up to five substitutions in Europe.

Read more: Man United predicted line-up vs Arsenal: Solskjaer to deliver the starting midfield we’ve all been waiting for