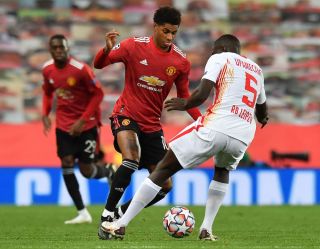 Manchester United will be looking to make it two wins on the bounce when they take on Arsenal in the Premier League at Old Trafford on Sunday evening.

The Reds go into the game on the back of a terrific 5-0 victory over RB Leipzig in the UEFA Champions League whilst the Gunners ran out 3-0 winners over Dundalk in the Europa League.

Marcus Rashford is widely expected to lead the reds attack after his hat trick midweek whilst Donny Van De Beek is also expected to keep his place in Ole Gunnar Solskjaer’s starting eleven after impressing against the German side.

Victory over RB Leipzig couldn’t have come at a better time for United. Last Saturday’s 0-0 stalemate against Chelsea had flattened the mood inside Old Trafford but the victory midweek has really raised spirits at the club. To win is one thing but to win in style like United did is some achievement. Leipzig are no mugs and stand a real chance of winning the Bundesliga this season so for United to not only beat them, but to beat them convincingly was some statement and in facing Arsenal it presents United another opportunity to keep the momentum going.

Games against Arsenal in the past have never been easy and this one will be no different. The Gunners have players in Aubameyang, Pepe and Lacazette who can really hurt United and Solskjaer’s men will have to be at their very best should they wish to take all three points but for how strong Arsenal might be going forward they still remain vulnerable at the back and Solskjaer will no doubt look to exploit that.

Rashford’s pace up top combined with Pogba, Fernandes and Van De Beek all supporting in from behind can cause the Arsenal back four real problems and if United turn up and play like we know they can then we should have too much for Arsenal.

It’s a game United go into as slight favourites and one which if they win can further keep the momentum going following the Leipzig victory. It wont be easy by any means but if United can repeat their performance from midweek then it gives us every chance of beating Arsenal and taking all three points.