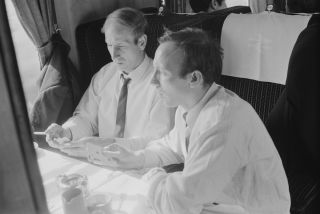 The only Mancunian to win both the World Cup and European Cup has passed away.

The former United and England midfielder, who was made an MBE in 2000, had prostate cancer and advanced dementia, according to BBC Sport.

“The family kindly ask for privacy at this sad time.”

Growing up Nobby Stiles was a player I enjoyed learning about because of his crazy streak on the pitch and how he won a tremendous battle in the 1968 European Cup against Benfica’s outstanding Eusebio, after doing a similar job on the Brazilian in the 1966 World Cup semi-final.

We are extremely saddened to learn of the passing of Nobby Stiles MBE.

An integral part of our first-ever European Cup-winning side, Nobby was a titan of the club’s history, cherished for his heart and personality on and off the pitch.

He will be sorely missed by us all. pic.twitter.com/aT0Mk47cEl

He made almost 400 appearances for United between 1960 and 1971 before going on to play for Middlesborough and Preston North End.

Great shot of Nobby Stiles returning to Old Trafford with Middlesbrough for an FA Cup 5th Round game. 1972. pic.twitter.com/5YUG7qaLU0

Stiles retired in 1975 but moved into management with Preston two years later,

He later managed West Brom during the 1985-86 which proved to be an underwhelming but brief spell.

In 1989, Stiles returned to United as youth team coach when he worked with players such as Ryan Giggs but he left again in 1993.

Stiles suffered a minor stroke in 2010, and was diagnosed with Alzheimer’s disease and prostate cancer.

Manchester United bought his World Cup and European Cup medals in 2010 for a combined total of more than £200,000 (via BBC News).

May he rest in peace.

Read more: Preview: Manchester United should have too much for Arsenal