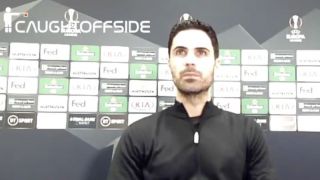 Arteta watched on as his Gunners side beat Dundalk 3-0 in the Europa League, as per RTE.

Three goals in four minutes settled the game as Eddie Nketiah, Joe Willock and Nicolas Pepe scored the goals for Arsenal, who not sit top of their group with six points from two games.

Arteta sounded happy after giving a run to some of his fringe players but admitted everyone must turn their focus on the upcoming game at Old Trafford.

They face a United side that has just beaten RB Leipzig 5-0, so there will be nerves in the Arsenal dressing room before kick-off.

As long as United fight and win every second ball it will be three points in bag.

I’m confident and predicted a 3-0 win on The Highbury Squad last night.