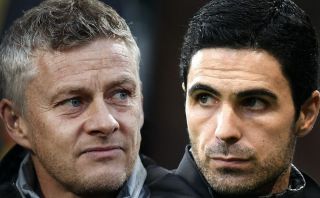 Arsenal manager and defensive midfielder Thomas Partey have both spoken about Ole Gunnar Solskjaer and his Manchester United side ahead of the two team’s domestic clash on Sunday.

Partey, 27, joined the Gunners during the summer transfer window’s deadline day after the London club activated his £45m release clause, as per TransferMarkt.

The industrious defensive midfielder has made three appearances in all competitions for his new side and is expected to make his fourth on Sunday when the Gunners meet United at Old Trafford in the Premier League.

United head into the clash of the weekend in fine form after being unbeaten in their last four matches in all competitions (4-1 vs Newcastle, 2-1 vs PSG, 0-0 vs Chelsea and 5-0 vs RB Leipzig).

Elsewhere, United’s counter-parts Arsenal will arrive at Old Trafford in patchy form after suffering 1-0 defeats to both Manchester City and Leicester City in their last two Premier League matches.

“If we do our work well, if we go in and fight for points, if we put a lot of pressure on them, we’ll be able to win.”

Gunners boss Arteta also took the time to admit that United have a devastating front-line on their hands and should Solskjaer get them firing on all cylinders, the Reds could be title contenders, the Spaniard said: “They create really good relationships and they are all very different.

“They glide together, they have some really good understanding and chemistry on the pitch. You can see that.

“I think that since the lockdown, Ole has managed to improve that a lot and you can see that at the end of the season, the amount of goals and types of goals they were scoring. They are a threat.

“They can play two or three different formations. We know that they’ve been changing some things because of the opponents sometimes, because of the quality of the players they have, and sometimes to change the game in certain moments.

“We have to be prepared for that because they have that adaptability, they have a big squad and up front they have a lot of options as well to do different things.”

United and Arsenal to kick-off at Old Trafford on Sunday at 4.30pm UK time.