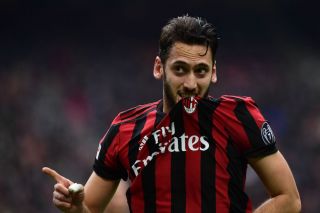 Manchester United are reportedly in talks to sign AC Milan playmaker Hakan Çalhanoğlu whose contract expires as early as next summer.

Çalhanoğlu, 26, joined AC Milan from Bayer Leverkusen in 2017 for a fee of £20.97m, as per TransferMarkt and has gone on to feature in 137 matches in all competitions for the Rossoneri.

The Turkish wide-man who operates on either the left-flank or as a number-10 has been directly involved in 67 goals in all competitions with arguably his trademark being his free-kicking ability.

According to a recent report from leading German journalist Christian Falk, AC Milan’s midfielder is in ‘concrete’ talks with United after turning down a recent offer from Juventus.

True: United is in concrete negotiations with Hakan Çalhanoğlu (26) @acmilan. the contact has been there since summer. therefore he turned down an offer from @juventusfc. @ManUtd has not to pay a Transfer fee (contract ends 2021) pic.twitter.com/faQOtYGZEe

The midfielder’s contract expires next summer which means he is able to speak with clubs outside of the country he currently plays in.

Falk claims that United are set to land the midfielder for free should they successfully agree terms with the Turkish maestro.

Should United agree to sign Çalhanoğlu on a pre-contract he will be eligible to team-up with Ole Gunnar Solskjaer’s Reds next summer and would become the Norwegian gaffer’s 11th signing (including Amad Diallo).