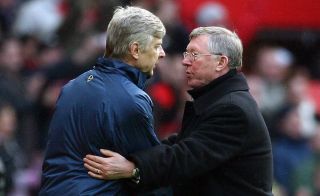 The former United manager had many obstacles to overcome during his time at Old Trafford, not least the influx of foreign managers. But it was the bespectacled Frenchman who gave him most trouble. This is an extract from Even the Defeats – How Sir Alex Ferguson Used Setbacks to Inspire Manchester United’s Greatest Triumphs.

From when Wenger first arrived at Arsenal in September 1996 until the end of the 2004 season, when his team went the entire league campaign undefeated, the Frenchman was a constant threat to Ferguson’s domestic ambitions. Eight years into his reign, Wenger seemed to be emerging on top in the duel. Over the next decade however, there was only one winner – and that was the Scot. So what happened?

Everything Wenger did seemed to irk Ferguson during the Frenchman’s first eight years in the Premier League. There is little doubt this frustration is rooted in the fact Wenger appeared to have his counterpart’s number, particularly after snatching the 1998 title from under United’s noses. There was a new kid in town and he threatened to usurp Ferguson and his team from the perch they were sat on for most of the 1990s. Some of the remarks Ferguson would fire in Wenger’s direction had smatterings of desperation about them, and the Arsenal manager’s ripostes seemed to be smarter. Whether it was the fact he was a bespectacled Frenchman, or because his team were exerting an authority over United not seen since the Old Trafford outfit’s ascent to the top of English football, Wenger always appeared to have an answer to the grenades Ferguson would throw his way.

Arsenal vice-chairman David Dein said of Wenger, ‘He influenced dramatically, not just Arsenal, but the rest of English football.’ His influence on Ferguson was obvious.

Mention is an understatement. ‘He’s just arrived from Japan, what does he know about it?’ Ferguson spouted following a dispute over the fixture list not long after Wenger’s arrival.

In another moment, also during Wenger’s first season at Highbury, Ferguson said, ‘Arsène Wenger’s had plenty to say. Maybe he should concentrate on Ian Wright’s tackles rather than talk about Manchester United.’

Wenger’s impact was immediate. His team was playing stylish football from the get-go, not something the Arsenal fans were accustomed to after the turgid football of George Graham and the coaches who followed. Wenger revolutionised the brand, playing some quick touch interplay, with strength, pace and skill, that had commentators purring. The Frenchman led Arsenal to third in his first season, and by the end of his second, the Gunners were league and cup winners, firmly putting Ferguson and his team in the shade.

By this stage the handshakes between the pair had become awkward on the occasions the two teams played each other. And if there was a psychological one-upmanship to be recognised from the exchange, it always appeared as though Ferguson wanted a friendship more than Wenger. The Frenchman would look the other way while Ferguson appeared a bit keener for eye contact to occur. The Scot wanted to drink wine together. Wenger would stand him up, leaving Ferguson like a jilted partner at the altar.

Most importantly, though, Wenger’s team were winning on the pitch, and in style. At least when Leeds and Blackburn had brief moments at the top of the tree, the way in which those two clubs won their titles was less pleasing on the eye. What really must have grated Ferguson was the plaudits Arsenal received from anyone who didn’t have an association with Old Trafford.

Nevertheless, the battle between the two managers ebbed and flowed. First, Ferguson held the upper hand. Then Wenger made his mark, before the United manager exerted his authority once more in the wake of that treble success of 1999. In the two years that followed, the Red Devils stole a march on their rivals, finishing 18 points ahead of Arsenal in 2000 and ten points clear of the Gunners a year later. A 6-1 United victory at Old Trafford in February 2001 seemed to illustrate the chasm between the two teams and was particularly galling for Wenger. By the summer of 2001 the dispiriting nature of that defeat, coupled with a splurge in the transfer market from Ferguson, appeared to suggest the disparity between the clubs was only going to become greater.

Ferguson seemed to be at his strongest, and announced he would be retiring at the end of the 2001/02 season. He brought in Juan Sebastián Verón and Ruud van Nistelrooy at a cost of almost £50m. United were putting their rivals in the shade on the pitch, and now the daunting prospect of these two coming along prompted David Beckham to predict that the side would go the whole season unbeaten. Surprisingly, however, the balance of power was about to swing back towards Arsenal. United stumbled from one defeat to another through the first half of 2001/02. Ferguson eventually blamed the poor form on announcing his retirement one year in advance. Heeventually reversed that decision on Christmas Day, at the behest of his family, and said he would never give such lengthy notice when he finally did decide to step down.

Whereas in the past this change of heart may have propelled United to title glory, this time they were up against a much-improved Arsenal.

The final nail in United’s title coffin that season came at Old Trafford, of all places, as Arsenal won 1-0, sealing the Premier League crown on opposition turf. After three seasons in the shade, Wenger and his team were now in the ascendency. This humiliation on home territory, aligned with splashing the cash the previous summer while Wenger remained prudent, only made Ferguson look more foolish. Verón, in particular, was a flop, and coming in at great expense. Whereas Wenger’s buys over the last three years, such as Thierry Henry, Robert Pires and Sylvain Wiltord, who scored the winner at Old Trafford to seal the title, were all proving far better value. These three combined cost a fraction more than Verón. More importantly, the French trio’s impact was significantly greater.

Part two and three of this extract will be published tomorrow. We would like to thank author John Silk (@JSilk) for sending this our way, and he will be appearing on the Strettycast to talk about the book next week!

Even the Defeats – How Sir Alex Ferguson Used Setbacks to Inspire Manchester United’s Greatest Triumphs. is published by Pitch Publishing, £20. It is available from Amazon.