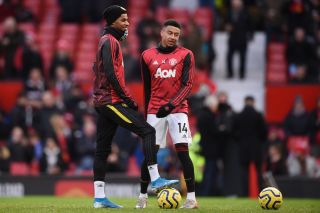 However, the English midfielder was quick to post a video to fans showing his support for attacker Rashford who grabbed a superb second-half hattrick.

Rashford was introduced with just under half-hour to go in last night’s game and put in a performance to remember after scoring three goals including one from a run made in his own half.

Check out Lingard’s reaction after his team-mate’s third went in.