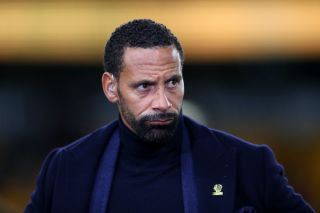 United were on fire last night during their Champions League Group H second round of fixtures after thumping Julian Nagelsmann’s men 5-0 at Old Trafford.

A first-half goal opener from Mason Greenwood got the Reds off the mark as Ole Gunnar Solskjaer’s men continued on their quest to go top of the Champions League ‘group of death’.

United’s MBE, Marcus Rashford was introduced with half-hour to go with the score still at 1-0, however, after a superb second-half cameo saw the 22-year-old smash home a hattrick, the Reds put themselves out of sight.

Number-nine Anthony Martial also got among the goals late-on as he successfully converted a spot-kick to open his 2020-21 United account.

Speaking after the game live on BT Sport, ex-United legend Ferdinand singled out criticism for RB Leipzig defender Upamecano who suffered most at the hands (and feet) of Rashford, as quoted by Metro, he said: “This is about being ruthless but I thought Upamecano had a nightmare today.

“This is the ruthlessness. There was no doubt in your mind, once he [Rashford] went through there, the confidence he’s showing at the moment and just his intent of hitting the back of the net and getting amongst the goals.

“Game over. There’s a venom when he hits it like that.”

Upamecano who has previously impressed has been strongly linked with a move to Old Trafford as early as next summer after it was reported that the Reds’ hierarchy were looking to land the commanding Frenchman, as per The Times.

Has the RB Leipzig defender’s poor performance last night hampered his chances of landing an Old Trafford move? – Let us know in the comments.