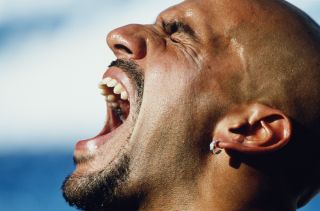 I’m loathed to use the word ‘flop’ as I find it a wholly offensive and generally narrow-minded term, so let’s just say that Juan Sebastian Veron struggled to adapt to the English Premier League.

On the face of it all, Veron appeared to be one of the most well-rounded midfielders of his generation, and showcased much of his clearly enviable talents whilst stationed in Italy with Lazio.

Whilst there, he linked up with various other homegrown talents within the squad whilst adopting a free midfield mentality – where he wasn’t employed to do much of the defensive work, and was instead given loose reigns to instigate the attacking game plan in whatever way he deemed fit.

It was presumed that his innate attacking qualities would suit a club as dominant and free-flowing as Fergie’s post-Y2K United.

That being said, Veron’s initial two years in the Premier League with United proved to be a baptism of fire for the Argentinian.

He struggled to adapt to the rough-and-tumble lifestyle of English football, and also found himself largely isolated when instructed to stay restrained to Ferguson’s typical 4-4-2 setup – which isn’t exactly the most ideal circumstance within which to plonk somebody as enigmatic and ‘free’ as him. Especially when his transfer fee suggests a key role.

As a box-to-box midfielder, his role suited a general 4-3-3 formation with a relatively resolute backline – both of which were ideas that hadn’t matured quite just yet in England by the time Veron rocked up. Therefore, it’s no wonder that Veron holds a particular tie to the Serie A, and has even used it as reason to suggest for why your average footballing superstar tends to struggle back home and flourish abroad in a slower brand of the sport.

In fact, most recently, with many of United’s stalwarts making a bee-line for the Italian border, Veron has seemed to suggest that this is more a calculated decision than many pundits and cynical fans give credit for.

Over the past year, Inter Milan themselves had pinched the likes of Ashley Young and Romelu Lukaku out to the San Siro, and in the past few months, ex-Arsenal favourite Alexis Sanchez also relocated to mainland Europe to compound the Argentine’s theory.

Only time will tell if the aforementioned players continue their rich vein of form in Italy and if this provides some gravitas to Veron’s statement.

But what’s for sure is that we do need to consider how different cultures can impact a player’s effect on a competition that is so far alien to what they’ve been accustomed to. I mean, if you relocated jobs to an area that didn’t speak your language, adopted a wholly different means of working and hounded you at every opportunity, then I think you’d struggle too!

Altogether, Juan Sebastian Veron was an outstanding and iconic servant to the game who will be even further missed as time trundles by, and from United’s perspective, let’s just chalk this one down as a situation where somebody just simply wasn’t suited to our particular brands of football … but flourished on his own terms.

What’s more, is that Veron was not the only player to join United in such turbulent times and falter because of it, and in fact, the infamous ‘transitional period’ of Ferguson’s reign notes a number of quality players who struggled during this time.

You can read Dev’s latest book ‘The Football Spider Web‘ for more information on how our beautiful game developed.