Manchester United are currently preparing to face-off against fierce domestic rivals Arsenal in the Premier League on Sunday.

The Reds will come into the weekend’s important domestic fixture off the back of yet another stunning Champions League performance after recently thumping RB Leipzig 5-0 in Group H’s second round of fixtures.

The Reds come in, in superb form though, having already taken seven points from a possible nine in all competitions in their last three matches.

Elsewhere, the Gunners head into the weekend’s game licking their wounds after two domestic defeats in a row saw them lose 1-0 to both Manchester City and Leicester City.

Ahead of Sunday’s hotly anticipated match-up between two of England’s biggest powerhouses, we have looked at how we expect Solskjaer to line his exciting Reds up.

Arguably in the best form of his life, no reason why United’s number-one won’t be commanded to man the sticks again against Arsenal.

Right up there with one of the best right-backs in the world.

Solskjaer will be hoping his defensive wall can keep Pierre-Emerick Aubameyang quiet as the Gabonese attacker remains desperate to get back in among the goals.

In fine form, much like the rest of the United back-line, I fully expect the Swede to get another start on Sunday.

Fresh off the back of making his Champions League debut last night, there is no reason why Solskjaer won’t stick with his captain again on the weekend.

Competitive left-back and team-mate Alex Telles has recently been sidelined having tested positive for COVID-19 which will all but cement Shaw’s place among United’s starting eleven on Sunday.

Granted, fans would love to see Telles get more game-time, but unfortunately, given the circumstances, they will be forced to wait at least two weeks whilst the Brazilian attacking full-back self-isolates.

The industrious Brazilian midfielder is in superb form and enjoyed arguably his best performance in a United shirt against RB Leipzig.

The South American has made it very tough for Solskjaer to drop him, therefore, I wouldn’t be surprised to see him line-up again against Mikel Arteta’s men on the weekend.

Similarly to Fred, United’s number-six was also in fine form against RB Leipzig as the commanding playmaker controlled proceedings start to finish.

Pogba had started on the bench during United’s last three domestic matches but I fully expect to see him recalled to his side’s Premier League starting line-up against Arsenal on Sunday.

Had a wonderful game against RB Leipzig as the Dutchman showcased tremendous work rate and creative vision.

Could be the key to unlocking the Arsenal back-line by working Arsenal’s channels in-between world-class defensive midfielder Thomas Partey and impressive centre-back Gabriel.

Introduced during the second-half against RB Leipzig, United’s Portuguese Magnifico was given a well deserved first-half rest but I totally expect to see him start from the off on Sunday.

Desperately unlucky not to have scored his first United goal against RB Leipzig after a correct offside ruling meant the South American must wait to open his account.

I expect Cavani to occupy the space in the starting line-up left by number-nine Anthony Martial who remains suspended following his dismissal against Spurs earlier this month.

United’s hat-trick hero against RB Leipzig and absolutely no way the 22-year-old isn’t named in Solskjaer’s starting-eleven on Sunday. 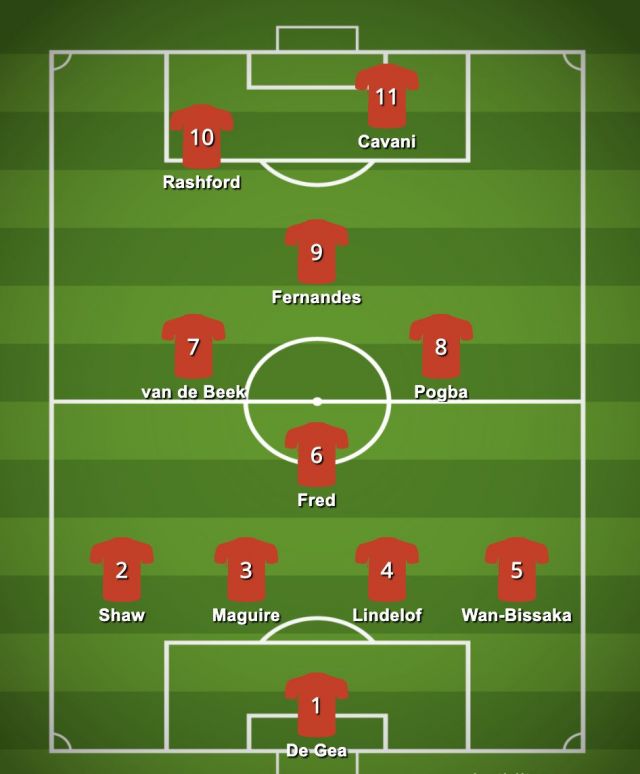