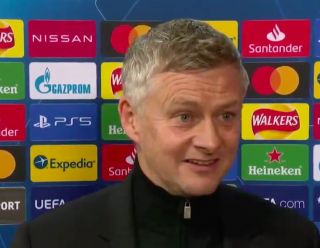 Ole Gunnar Solskjaer was delighted with the work rate of his side as Manchester United hammered RB Leipzig 5-0 in the Champions League group stages.

Marcus Rashford scored his first United hat-trick from the substitutes bench as the Reds put last year’s semi-finalists to the sword in emphatic style in the closing stages.

Solskjaer chose to rest Rashford and the so-often indispensable Bruno Fernandes as he rotated his team during a congested fixture schedule.

And the duo ran riot when they eventually came on, capitalising on a tiring Leipzig defence.

As the United boss noted in his post-match interview, the starting XI laid the ground work for the substitutes to thrive in the final half hour.

United now have six points from six in the so-called ‘group of death’ and Solskjaer will be thrilled with his work on the opening two Champions League match days.

Listen to Solskjaer’s immediate post-match reaction below, via BT Sport:

"We had to rest a few because this season is relentless."

"This group is coming together."