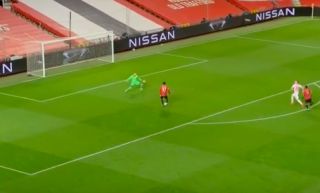 What a substitution from Ole Gunnar Solskjaer.

And just 15 minutes later, the man-of-the-moment has netted two brilliant goals to put the Reds out of sight against last year’s semi-finalists in the competition.

The first came in bizarre circumstances as Fernandes found Rashford with an incredible reverse pass, and the England international broke through and finished despite the offside flag being raised.

Replays showed Rashford was inside his own half when the pass was made, meaning the decision was reversed by VAR.

Just minutes later, Rashford found his way through on goal again and his finish was emphatic yet again.

Marcus Rashford is on fire 🔥

Two goals in two minutes to seal a great win for Man Utd!