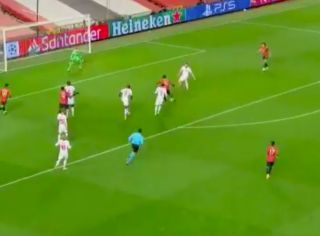 Man of the moment.

Marcus Rashford can do no wrong on the field or off it right now and a remarkable hat-trick has sealed a stunning Champions League victory for Manchester United against last year’s semi-finalists RB Leipzig.

Rashford came on in the 63rd minute for Mason Greenwood and scored his first United hat-trick in just 18 minutes.

Each finish was emphatic, and he could even have had four had Anthony Martial not stepped up to take the penalty, United’s fourth on the night.

RB Leipzig completely gave in and the floodgates opened in the final 20 minutes, and Rashford’s third was a sweetly-struck volley in added time.

See Rashford’s third and United’s fifth below, via BT Sport:

Marcus Rashford is on another level tonight

Brought on a sub at 63 minutes, he's bagged a hat-trick as Man Utd hammer RB Leipzig 5-0!

What a cameo from the man of the moment… pic.twitter.com/mj7d1pEU7U

2 responses to “Video: Rashford scores hat-trick to make it five for Man Utd against RB Leipzig”