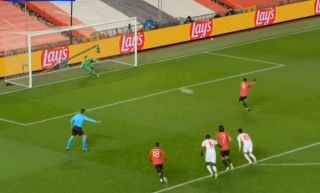 Anthony Martial needed a goal and made easy work of his penalty against RB Leipzig.

Manchester United already three points in the bag when they were awarded a penalty near the end.

The scoreline was 3-0 — thanks to goals from Mason Greenwood and Marcus Rashford (x2).

But when the penalty was awarded it wasn’t Bruno Fernandes or Rashford who stood up. Instead they let teammate Anthony Martial take it, knowing that a goal would do the French striker good in the long run.

He executes the penalty brilliantly and strikes it into the left-hand corner.

The keeper gets close but Martial put enough power behind his shot to ensure it went in.

Watch the penalty below, footage courtesy of BT Sport: