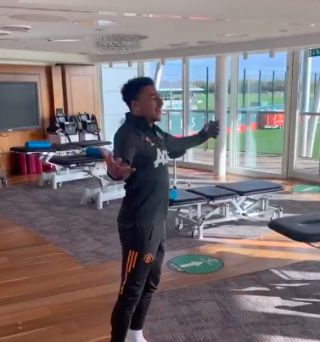 Paul Pogba has been in good spirits ahead of tonight’s Champions League tie against RB Leipzig at Old Trafford.

The Frenchman has been included in Ole Gunnar Solskjaer’s Manchester United starting XI to face last year’s semi-finalists, alongside Fred, Nemanja Matic and Donny van de Beek in what appears to be a midfield diamond.

Solskjaer has made six changes to the side that started the drab 0-0 draw vs Chelsea on Saturday, but there is still no place in the squad for Jessie Lingard who is out injured.

But while he is not available, Lingard is keeping himself busy entertaining his teammates.

Lingard shares a close relationship with Pogba and was filmed doing a hilarious impression of his fellow United academy graduate at Carrington,  much to Pogba’s amusement.

See the video of Lingard impersonating Pogba below, via Pogba’s official Instagram story: