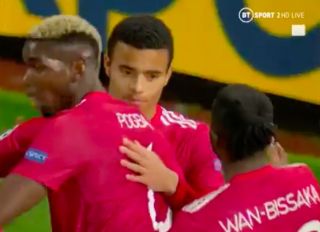 Manchester United have made the perfect start to their Champions League group stage fixture against Bundesliga high-flyers RB Leipzig at Old Trafford.

Ole Gunnar Solskjaer’s men have taken the lead through Mason Greenwood’s typically-clinical finish, but much of the credit must go to Paul Pogba after some exceptional build-up play.

Pogba has looked sharp in the opening exchanges and has been involved with some fine interplay with Greenwood’s strike partner Anthony Martial.

The Frenchman picks the ball up in midfield, drives into the space in front of the Leipzig back four before playing a pin-point through ball to Greenwood.

Greenwood then made no mistake with an excellent low finish past goalkeeper Péter Gulácsi.

The goal was checked by VAR with Greenwood very close to being called offside, but the teenager was given the benefit of the doubt and the Reds deservedly lead.

See Greenwood give United the lead below, via BT Sport:

What a finish that is from Mason Greenwood 🔥

Paul Pogba played him through and he didn't even need to take a look at the goal! pic.twitter.com/IDKGxanChp