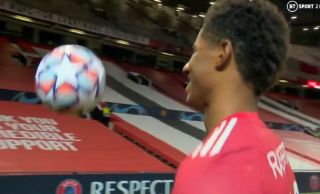 A very comfortable victory for Manchester United with lots to applaud.

Marcus Rashford has given us so many reasons to cheer off the pitch when it comes to fighting against child food poverty, and it was only a matter of time before he would stun us again whilst wearing a United shirt.

The England international was named on the bench tonight because Ole Gunnar Solskjaer can now afford to rest him and still field a strong side.

For instance, United were winning 1-0 before Rashford was introduced but the difference he made was totally unexpected.

RB Leipzig are no pushovers… Well, at least we were told all along they were one of the best sides in Germany.

United have beaten last year’s Champions League finalists already this season. Now they can add one of last season’s semi-finalists to the mix. It’s a super start to our European campaign and seeing Rashford score his first hat-trick for the club makes it even more memorable.

Footage from BT Sport shows Rashford taking his match ball down the tunnel:

What a night for Man Utd, following up the PSG win by thrashing RB Leipzig 5-0…

Not to mention Marcus Rashford's first hat-trick for the club 🙌@rioferdy5 and Paul Scholes are happy campers! pic.twitter.com/badspZWBiQ

Rio Ferdinand can be heard singing Rashford’s praises at full-time.