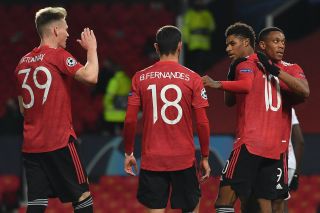 Manchester United picked up another big three points in the UEFA Champions League tonight. Not only did they press like a pack of dogs to win back possession, they won the game convincingly and with a five goal margin! I don’t think many teams will want to face us in the latter stages of the competition.

Here is how I think each United player rates out of 10 on the night.

David de Gea – Quiet night between the sticks but some brilliant reaction saves to keep RB Leipzig out. 7

Aaron Wan-Bissaka – Very good again. There are not many full-backs out there better when it comes to defending. 7

Harry Maguire – Solid display by our captain. Met his match in terms of areal dominance in RB Leipzig’s Dayot Upamecano. The question is would they make a good partnership? 7

Luke Shaw – Did better going forward and put in some inviting crosses. 7

Nemanja Matic – United look a calm unit with the Serb sat at the base of midfield. 6

Fred – Played really well put let down by his passing in the first half. Kept United ticking and made me laugh whenever he scampered over to the ball before a free-kick. As if! 7

Donny van de Beek – Showed some nice glimpses throughout. Can be happy with his first performance for MUFC in the Champions League. 6

Anthony Martial – Too quiet. Needed that goal – good decision from his team-mates to let him take it! 5

Marcus Rashford – Incredible substitute performance. RB Leipzig saw nothing until Rashford entered and he marked the occasion with a hat-trick. 9

Scott McTominay – Continued Matic’s job with ease after coming on. 6

Bruno Fernandes – Had a bit of a rest tonight but when he came on he showed why he’s one of the first names on the team sheet. 7