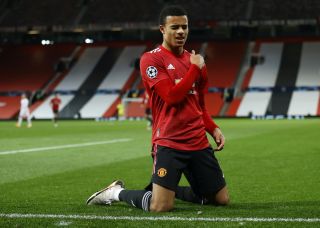 Mason Greenwood is so clinical in front of goal.

He took his goal really well after a superb through ball by Paul Pogba, but it was the young Englishman who remained calm in front of goal before finding the back of the net.

Greenwood’s goal makes him the second youngest player in Manchester United’s history to score for the club in the Champions League.

Wayne Rooney is still the youngest after scoring against Fenerbahce (hat-trick on his debut) in September 2004, aged 18 years and 340 days.

Greenwood comes second aged 19 years and 27 days, as seen below via @SkySportsStatto:

It’s a remarkable record and it was also Greenwood’s first shot on goal in the Champions League.

And there will be many more!