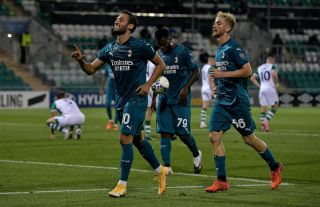 Reports that seem far-fetched are rushing out of Italy to suggest Manchester United are willing to offer a five-year contract to midfielder Hakan Calhanoglu after the Turkey international snubbed AC Milan’s first offer of an extension.

Gazzetta dello Sport claims that Calhanoglu’s future in Italy is uncertain after entering the final year of his contract.

The report suggests Milan have offered the playmaker a proposal worth €3m (£2.7m) per season to stay with them, however, the player is allegedly demanding more.

Calhanoglu may be in the form of his career but this is not a player United need to be watching right now. We’ve got a number of options in midfield and he will just add to a list that already consists of Paul Pogba, Bruno Fernandes and Donny van de Beek.

Apparently there is a considerable distance between the parties at present as Milan, with claims Calhanoglu wants double the amount the club offered as part of a proposal.

Van de Beek joined United in the summer and has been limited to starting games in the League Cup.

Why on earth would we sign Calhanoglu when we’re already well-stocked in that department — with Solskjaer unlikely to keep all of his the players happy as a result?

Surely this is just another ridiculous rumour.