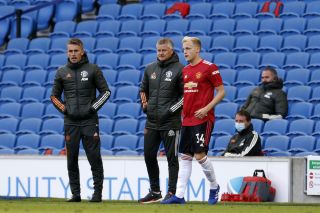 After beating Paris Saint-Germain 2-1 last week, Ole Gunnar Solskjaer’s side are hunting for a second successive win over a strong European side that are unbeaten in the Bundesliga so far this season and one point clear of champions Bayern Munich, who won the Champions League last season.

The manager sees no reason why United can’t aim for the Champions League final.

United earned a spot back in the Champions League after a third-place Premier League finish last term before being drawn in the group of death alongside PSG, Leipzig and Istanbul Basaksehir.

Not many neutrals fancied our chances on matchday one as United travelled to Parc des Princes to face PSG, but they were proven wrong as Solskjaer’s side performed brilliantly and deserved the three points.

Solskjaer will want his players to believe they can beat anyone they face in the competition and toonight they face another big test.

Solskjaer told ManUtd.com: “[We want to] enjoy it and make the most of it as well because we go out to win every single game of football that we play.

“We’ve got a good quality squad and I feel we can go into any game believing we can win it and I think that shows. We played one of the best teams in Europe [PSG] and we beat them away from home, so why shouldn’t we aim for the final?”

Here’s what United fans are thinking ahead of the game, with most confident of a win over our Bundesliga opponents: