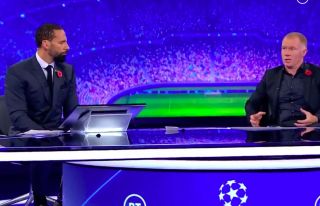 The man of the moment scored his first Manchester United hat-trick inside 20 minutes from the substitutes bench to cap off a resounding 5-0 victory over last year’s Champions League semi-finalists RB Leipzig at Old Trafford.

It seemed improbable that United would take points in their opening two games of the so-called ‘group of death’, but with the help of Rashford, Ole Gunnar Solskjaer’s men have six points from six and are now in complete control.

United greats Rio Ferdinand and Paul Scholes were delighted with Rashford at full-time after his electric impact.

Rashford was criticised for a slow start to the campaign, but is on fire right now and took each goal emphatically this evening.

Listen to Scholes’ and Ferdinand’s thoughts on Rashford below, via BT Sport:

What a night for Man Utd, following up the PSG win by thrashing RB Leipzig 5-0…

Not to mention Marcus Rashford's first hat-trick for the club 🙌@rioferdy5 and Paul Scholes are happy campers! pic.twitter.com/badspZWBiQ