Ole Gunnar Solskjaer has revealed Alex Telles’ recent absence from the Manchester United squad is because the Brazilian full-back has tested positive for coronavirus.

Many supporters were mystified by the omission of Telles in Saturday’s squad that faced Chelsea and the squad that hammered RB Leipzig 5-0 in the Champions League on Wednesday evening.

Telles impressed on his United debut against Paris Saint-Germain last week but has not been involved since.

And Solskjaer has confirmed that United’s deadline day signing has COVID-19, when asked about his absence at full-time at Old Trafford.

“Yeah he’s been out now for a little while because he has tested positive for coronavirus,” Solskjaer told MUTV, as quoted by the Manchester Evening News.

“No symptoms, he’s fine and we can’t wait to have him back.”

Telles has since sent a reassuring message to United fans, thanking them for their caring messages and announcing he is not suffering from any symptoms.

It’s a shame that Telles is unavailable for Solskjaer just as he gave a glimpse of what he can offer, particularly in the middle of a congested fixture schedule.

However, Luke Shaw was superb in the Brazilian’s absence against RB Leipzig, providing width and great attacking support for United’s unfamiliar diamond midfield, and barely putting a foot wrong defensively.

Telles’ absence will only increase Shaw’s workload in the coming games as United prepare to face Arsenal on Sunday.

See Telles’ message to supporters, via his Instagram page: 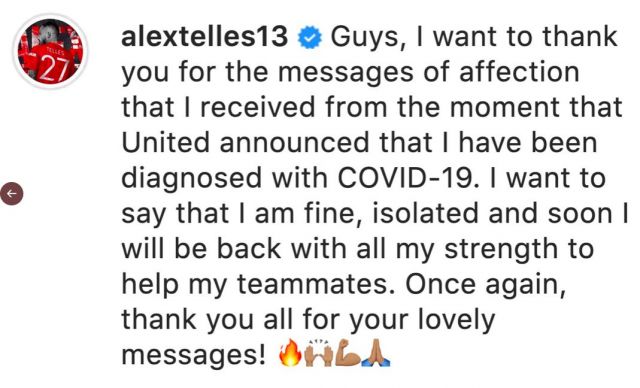