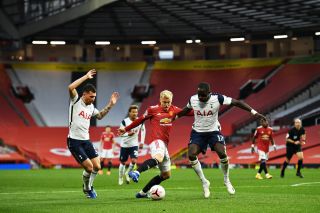 Macro van Basten was critical of the young midfielder’s decision to sign for a club he was going to struggle to play for regularly.

The 23-year-old moved to Old Trafford from Ajax over the summer but has so far struggled to secure regular game time and was an unused sub on Saturday then the team drew 0-0 with Chelsea.

Juan Mata got the nod ahead of Van de Beek against Chelsea, which does not bode very well no matter how you gloss it up. The Spaniard is years past his best and everyone is keen to see what Van de Beek can bring to the table.

While manager Ole Gunnar Solskjaer has stressed Van de Beek’s time will come, Wan Basten has now weighed in on the situation, suggesting that the player shouldn’t have jumped at the opportunity to sign for United and instead waited for a move where he could have played regularly at least.

“It is very bad for such a boy to only play six or seven times in a year,” Van Basten told Ziggo Sport.

“That’s terrible for your rhythm! You can earn a lot more, but you also have to see where you can play.

“It is about a five-year contract that he can sign? No, that’s bullsh*t. Then you shouldn’t go to Manchester United, but wait with it or for another club. You have to want to play football every week, and such a club is then bad for your career.”

Can everyone just relax a moment?

Van Basten must realise that Solskjaer is the manager and it’s his decision at the end of the day.

I know fans are excited to see a new signing but we must trust that Solskjaer knows what he is doing.

I’m sure there will be plenty of football for Van de Beek this season.