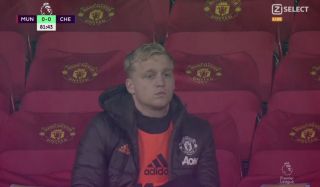 Manchester United’s Donny van de Beek was caught by the television cameras in the stands at the end of yesterday’s stalemate with Chelsea.

He didn’t look happy and I think everybody understands why.

The Red Devils recruited Van de Beek in the summer and Ajax received a fee in the region of £35m in exchange for the midfielder, as per BBC Sport, but manager Ole Gunnar Solskjaer has elected not to use him against Chelsea when his side were craving a goal in the dying stages.

Van de Beek was an unused substitute and United were held to a 0-0 draw at Chelsea.

He was caught by the cameras looking rather bored in the stands, with a face that would paint a picture!

I would have thought Van de Beek would have got the nod ahead of Juan Mata over the weekend but it wasn’t to be.

Maybe he will get the nod against RB Leipzig on Wednesday night at Old Trafford?

Paul Pogba finds himself in the same boat.