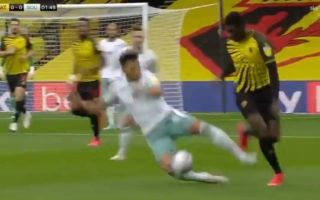 Reported Manchester United target Ismaila Sarr was lucky not to have broken his leg. How on earth was it not a red card?

The Red Devils added Sarr to their transfer shortlist during the summer when it became clear to everyone that Jadon Sancho was staying put at Borussia Dortmund, as per the Manchester Evening News.

Ole Gunnar Solskjaer identified the need for the right-sided attacker at the beginning of the summer and signed two youngsters that can play the role. Facundo Pellistri, who played for the Under-23s last night, and Adama Traore who remains at Atalanta until January.

United apparently submitted an official offer to sign Sarr from Championship outfit Watford, but the Hornets were reluctant to cash-in on their most prized asset. They will be aiming to regain promotion to the top flight and keeping Sarr can only help them achieve that.

Sarr is playing against Bournemouth this afternoon — and was lucky to have been able to play on after a dangerous tackle from Lloyd Kelly took him off his feet.

It was reckless, high and out of control. Yet the referee only gave Kelly a yellow card…

Did Lloyd Kelly deserve a red card for this first-minute tackle on Ismaila Sarr?

That’s a red card whether it’s in the first minute or later on in the match. Shocking decision.

It’s hardly sufficient protection for Sarr from the officials? 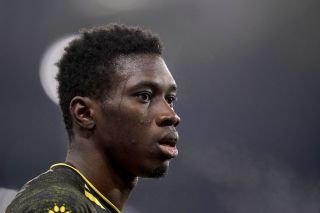 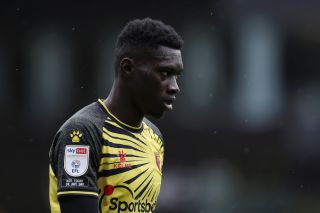